It's times like these I'm suddenly struck with the urge to make an Insta-book out of my 2013 instragram pictures.

Half the house is in boxes and the other half is disheveled. Tomorrow we pack to go to the mountains for the changing of the years. We'll get the keys to our new (rental) house on Friday!

It has occurred to me that this past year has been very probably the best, most comfortable year for me in my role as "stay at home" mom. Is it a coincidence that it also is the year both kids have been at school and/or preschool most days of the week? I think not.

Caring for (very) small children does not appear to be in my naturally-acquired skill set. Both times I've done it rather poorly and have fallen apart rather spectacularly. While it's true that there were many other rather large stressors at those times in my life, I highly doubt that even if I were to have the most ideal circumstances surrounding another pregnancy and birth that it would be possible without medication.

Which makes me sad. However, I don't want to put myself or my family through anything like my postpartum experiences again.

I'm not on medication now and I (usually) feel just fine! This makes me hopeful and wistful and I've briefly entertained the thought of another child.

A few months ago I was shopping at our local grocery store. A lady joined me by the spinach. Her tiny infant son was in a car-seat she had placed in the shopping cart and he began to fuss. She began gently rocking the seat but he didn't settle down. Instead he began screaming that ever-so-distinctive newborn cry.

My reaction surprised even me. I wasn't expecting to feel anything as strongly as I did. I almost had to leave the store. An avalanche of feelings suddenly dumped into my awareness, triggered by that crying. My heart was racing; I felt panicky and fearful, desperate and frantic, helpless and terrified.

Sanity was a difficult thing to maintain during those first few months of a screaming Elaine and a wide-eyed, sensitive Val. Our home had been and was still endlessly under construction and chaotic and I wasn't sure whether we'd be able to short sell it or have to go into foreclosure. Superman was on the break-in phase at his new job and largely unavailable in every way. I could barely function and then I couldn't function.

It was very hard.

All of it came rushing back as I stood there by the produce, listening to this newborn do what lots of newborns do - cry.

I quickly got the remaining items on my list and then hurried to the car. I closed the door and began to cry, too.

At dinner tonight Val said she wishes she could have a little brother. I told her I wish that too. I know God hears us. I want to hear Him. Little brothers can come in more ways than one. 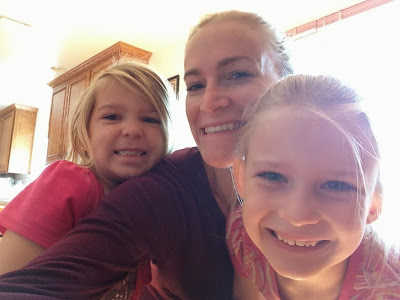