So this almost wrecked ME

What kind of a man collides with a metal guardrail at 40 mph with absolutely nothing to cushion the blow except one layer of spandex...and then gets back on his bike 30 minutes later and rides 90 more miles? Mine. (And then the next day he rode 50 miles. And then the day after that he rode 25 miles.)

What kind of man has an enormous bruise with scattered road rash across his left hip and thigh? Also mine.

Quite fortunately for Superman, the person biking right behind him just happened to be a fireman/paramedic. He watched the whole thing happen and was on scene immediately, starting triage. His wife later said to me that it was the kind of wreck that people either do not live to be able to walk away from or they walk away mostly unharmed. A passing motorist (also an off-duty fireman/paramedic! Let's hear it for those guys!) saw it happen and stopped to offer assistance. His immediate thought was, "there's no WAY that guy doesn't have a broken femur." Way, dude.

I am so very deeply grateful it wasn't any worse.

Oh, and in case you wondered, the bike is totally fine aside from a small scuff on the seat.

May this be the worst bike wreck he is ever a part of.

Here's my Superman at El Capitan in Yosemite National Park after riding his bike 170 miles to get there. Being married to this guy is definitely NOT boring. 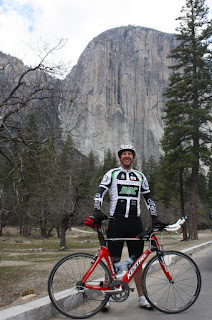