Christmas happened. Here's a picture of what Superman and I received from our daughters (with help from Grandma and Grammie.) 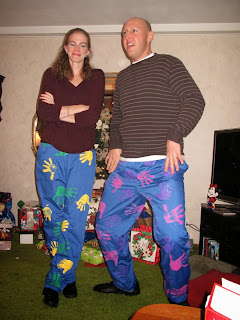 One or all of us has been sick since early December. Currently three of us remain so. All I have to say is my abs are rock solid thanks to the cough I've had since mid-December and I greatly look forward to the time I'll be able to taste food again. Superman has been home from work with laryngitis. Elaine has the cough as well, and as she utterly despises blowing her nose, I'm worried it'll become an ear infection, too. She has a tendency to get those.

I don't even know what to write here, any more.

My pattern has been to look around and criticize and be negative. And then to resent and start piling on the "if only"s. It's hard to break from that. And I don't want to be fake, either.

I'm kind of wondering if my years of blogging have come to an end, honestly.

I'll keep writing, I hope. Or maybe not, since I haven't been writing in my hand-written journal, either. Maybe it'll come back after I sort out some issues at the core of how I live and see myself. I hope it will.

I think I'm just at that fragile point of growth where you want to share and explain and work through it and have an outlet, but it's still so new and I'm not solidly grounded yet. One or two blasts or even questions from someone might shake me more than I'm willing to risk right now.

We went to a park, today, the four of us. There was a climbing structure that was suggested for 5-12 year olds. Elaine took to it like a fish to water. It warmed my tree-climber's heart to see how confident and sure-footed she was, and also the sheer pleasure she derived from climbing. She went to the top almost immediately. I'm proud to say she gets that from me. I also hope that her falling-out-of-trees track record is as good as mine. (I've only fallen out of trees twice. Once got me a bloody nose, and the other time I slipped and fell into a muddy swamp, which was considerably more fun than a bloody nose.) 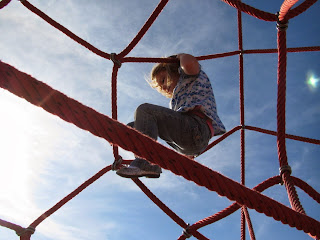 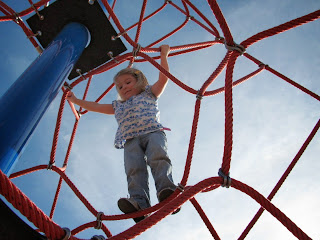 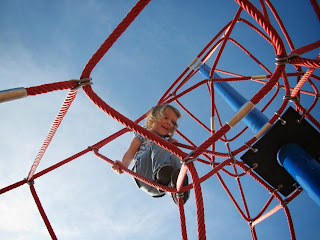 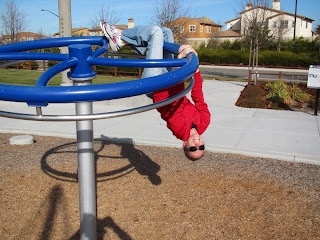 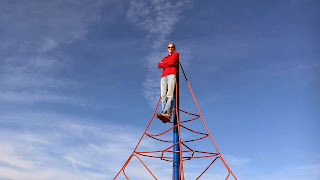